We’ve all seen them.

We’ve probably hesitated to go to the gym to avoid the specific times they go.

I’m talking “bros”. And without proper advice, you could find yourself in the middle of a full swarm of them. 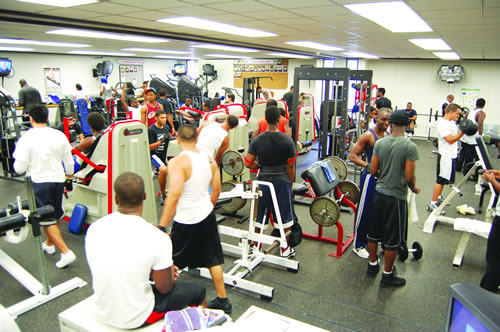 This is a funny topic to talk about and something that anybody who is a consistent lifter knows all too well. There is a type of person that really gravitates toward weightlifting, but doesn’t really get much done when they go. This can be an issue for people who show up for a lift with a plan and a purpose. You showed up to the gym, set goals for yourself, brought your program that took time to put together, and…….you have to wait because someone is on the squat rack doing a set of bicep curls to infinity. I’m not dissing bicep curls either, I enjoy a good arm farm as much as the rest of you. But, there’s a time and a place to pump the balloons.

I wanted to share some clear cut ways you can avoid this epidemic of bro-ness.

I can’t tell you how much it bothers me when someone isn’t aware of other people lifting around them. It just takes common sense. We’re all there paying money to have access to getting better, but sometimes there are only two squat racks with two people using them that must think they bought the racks with their gym fees.

“Yo bro, stop hogging the rack or let me work in.”-Brain

This is our brain’s snap reaction to someone’s selfish lifting tendencies. A proactive, intelligent lifter would eventually think of an alternative to their programmed exercise choice and avoid the argument. I’ve gone both routes and sometimes the person doing 15  sets and taking four minutes of rest snaps out of it and apologizes. Other times, they put their headphones back on and add a few sets on purpose. Also, this person is probably wearing a belt for 135lbs. and quarter squatting.

TIP: When lifting in a public gym, be aware of who needs to work in and help everyone get better at the same time. We all have busy schedules, if you have 5 or 6 sets to do get in and get out.

2. Spending too much time on your phone

This has always been an issue since phones became affordable and an integral part of our lives. There are some people that literally have all day to workout and aren’t on a clock, so they tend to take their time. Understandable. Sometimes, it really isn’t what you think and the person really just has a ton of emails and texts to reply to. Understandable. This is not as much a problem as long as when you approach the person to work in or use that space, they comply and seem genuinely busy. Nobody needs to say sorry, just let me get some time on that lat pulldown too because there is only one. I don’t mind at all that someone gets caught up because they have a busy life, we all do and we all should understand that. They’re not officially a “bro” until they play candy crush for 2 minutes on the machine we need and when asked if we can work in they say, “Sorry dude, I have like 5 more sets”. That’s strike three strikes in one sentence.

TIP: If you have tons of work stuff on your phone, set a timer for your rest time and plan to have that span of time for answers or replies and then put the phone in your pocket to get back to training. If you want to video sets, save editing your clips or posting it to social media for when you get back home. It doesn’t make much sense that someone has to delay their #gainz because you want to pick the right filter for your videos or trim a clip to edit out your bad reps.

3. Checking yourself constantly in the mirror 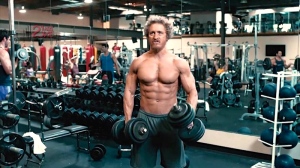 This is not for the occasional glance. This is the person who checks mid rep, again mid set, and then a nice long stare n’ flex during the rest period. This is not something that is an annoyance to your day if you don’t let it. But, there are days where you look over and see the constant flex fest and the brain gets to speaking.

“You literally have only bench pressed for an hour each day the month. We all get that your chest has grown.” -Brain

TIP- If you must flex, try to keep it in a spot where most of the gym isn’t facing. I get for some, the point is to get eyeballs on the bod. But we don’t want to see it as much as you think. Go into the group exercise room when there are no classes or nobody working and absolutely go to town. Flex until you cramp. But, save it for another time. Some people are training, don’t make them have to watch a 45 minutes pose sesh.

4. Never does a lower body workout (or counts the leg extension as one)

Maybe don’t come at your friends like this. But, there are memes out there specifically for this topic because it’s common. We have a tendency, as people, to go for things that offer immediate gratification. In the fitness world, this means improving muscles we can see, or “mirror muscles”. That includes shoulders, chest, bi’s, tri’s, and for some their abs. Most people don’t stop and hand out compliments on your quad/hamstring definition or size. So, naturally, people will focus on what will give people the impression that they work out. It’s hard for people not to seek compliments for the hard work they are putting in. I get it, but keep a balance.

Some people aren’t even looking for praise, they just follow the path of least resistance. I’m not saying that a bench press, lat pulldown, cable row isn’t tough. Those exercises can be extremely challenging and lead to massive improvements in strength. I’m simply stating that lying down supine on a bench and pressing a bar up is not nearly as difficult from a demands or technique standpoint. Almost anyone without severe shoulder issues can perform a successful rep of the three previously mentioned exercises. However, a deadlift or barbell back squat takes more practice and technique to gain proficiency. But, you need to know that neglecting big lower body exercise out of your training leaves a huge gap in your training and potential.

Lower body exercises not only produce great improvements in muscle size and strength, they can also stimulate the hormones in the body necessary to help total growth in the body. In layman’s terms, lower body workouts can help support and stimulate growth of your upper body too. Specificity does play a role (chest exercises stimulate chest growth), but lower body exercises will help lower body fat (which helps upper body muscles show to a greater degree) and produce hormones like growth hormone (which while circulated can be distributed to upper body muscles as well).

Oh, and leg extensions < squats, lunges, deadlifts, RDLs, jumps… that is all.

TIP- For people really struggling to add in lower body work because a) it sucks or b) they don’t know how to perform the exercise, there are easy fixes. For “a”, throw in either jump rope or bodyweight squats/lunges in between sets of your upper body workout. This gives you an added health benefit elevating heart rate and gives you a more productive rest time for your upper body. If you belong to the “b” group, it is understandable to feel this way. However, there is so much quality information online now that you can easily access tutorials and coaching on sites like youtube.

My advice: Watch a few different videos of how to do the exercises from different coaches. Some coaches will cue an exercise differently, so watching a few different ones will give you the general gist of what to focus on. Either way, throw in two bodyweight leg exercises in your next upper body workout and reap the benefits.

Go out and make the gym experience better for everyone around you. A good bonus tip is to avoid the chest exercises like the plague come 5-6:30pm. This is blood in the water for sharks. Sharks that get off of work at 5 and are hungry for chest growth. It’s likely that if you’ve been working out at all you already know this. Mid-morning/mid-afternoon is always a safe bet to get your workout done if possible.

This site uses Akismet to reduce spam. Learn how your comment data is processed.

The OM Project
The Blog of Author Tim Ferriss